Doing squats does wonders for your legs, but the overhead press does the same for your shoulders.

It is the basic movement for this muscle group stem and it gives your deltoids an amount of improvement like no other exercise. When you want to get your delts up to par, you will need to decide what kind of overhead press you are going to perform, and even if it seems a little hard to digest, it’s not just picking between a barbell or some dumbbells.
Of course, you will use both of them but you will also use machines, kettlebells, various types of grip such as neutral, pronated and supinated, bilateral versus unilateral exercising as well as various stances – standing, sitting or kneeling. The overhead press is really versatile and has a great number of variants, so here are six of the best for your next shoulder workout!

When you sit during your dumbbell press, you can lift more weight because you can use your back to push against the seat. This means you can grow your muscles faster since you can create more micro-tears in your muscle fiber with the heavier weight. 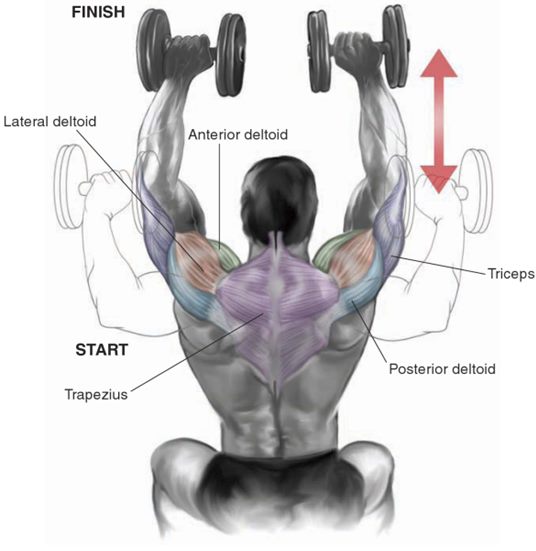 To perform this exercise, sit on a seat with a low back or an upright bench with two dumbbells. Lift them just outside your shoulders with your palms facing forward. You will need to contract your deltoids and extend your elbows straight upwards until both of the dumbbells are raised over your head with your arms almost locking out. Lower the dumbbells to their primary position slowly and congratulations, you’ve just completed a rep. Do the seated dumbbell press as your first exercise, if you’re not doing the military press. If you are, save the seated dumbbell press for another day or do them right after the military press, which brings us to…

Military presses are thought to be the fourth big lift, along with bench press, squat and deadlift exercises, but if you really want to test your mettle, the classic standing barbell press will do the job. Your upper-body pushing strength is put to the test, but it’s way more than just a triceps and deltoid movement. You will also need a lot of core stabilization to do military presses, as well as a tough midsection as a foundation from where the pressing begins.

To perform the military press, hold a barbell with an overhand, shoulder-width grip while standing. Lift the bar up to your shoulders while bending your knees a bit, and then tense up your whole body. While making sure that your lower body and torso are solid, press the bar over your head and contract your deltoids while extending your arms. You don’t need to lock out, so stop right before you do. Lower the bar down and remember to not let it rest on your chest or shoulders between reps. Do this exercise first in your shoulder workout and make sure to not have any other big lifts on the same day.

Everyone who’s anyone in the bodybuilding world recommends machine presses for one of two reasons – first, it’s safe because the motion is controlled by the machine, which means little to no risk of injury when compared to using dumbbells or barbells, and second, you can overload your target muscles because the machine eliminates the need for some of your stabilizing muscles because it is a stabilizing agent itself. It’s a far safer and a bit more effective deltoid exercise, so of course it should be on this list. 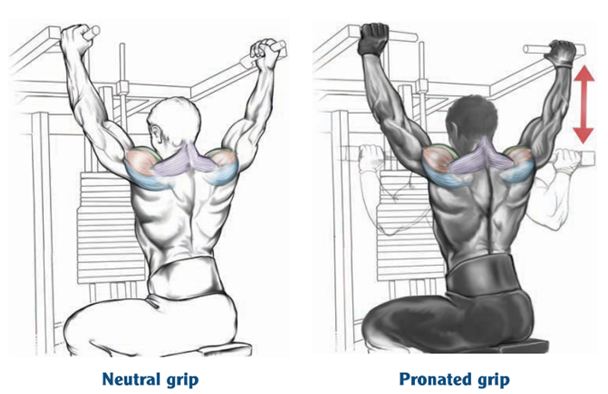 Do this exercise on an overhead press machine. Start by adjusting your seat so that you’re able to extend your arms through the entire range of motion, but you should also be able to put the handles down to your shoulders without the weight being on the stack. Sit and hold the handles with your hands just outside your shoulder width, with your palms facing forward. Squeeze your deltoids to press your handles straight up until your arms are fully extended, but not locked out. Put the weight back in the starting position to do another rep. Do this exercise early in your training instead of barbell or overhead dumbbell presses.

When you do the Smith machine press, you will benefit from the extra safety and overload benefits as the machine press, except you will be doing some barbell presses since you’ll be grabbing a bar instead of some rubber handles. You can’t make a clear difference in efficacy between the Smith machine, Hammer Strength overhead presses or a selectorized machine since they have pretty much the same effect. Instead, you can switch up the varieties in your training routine and pick a favorite that gives you a better feeling. 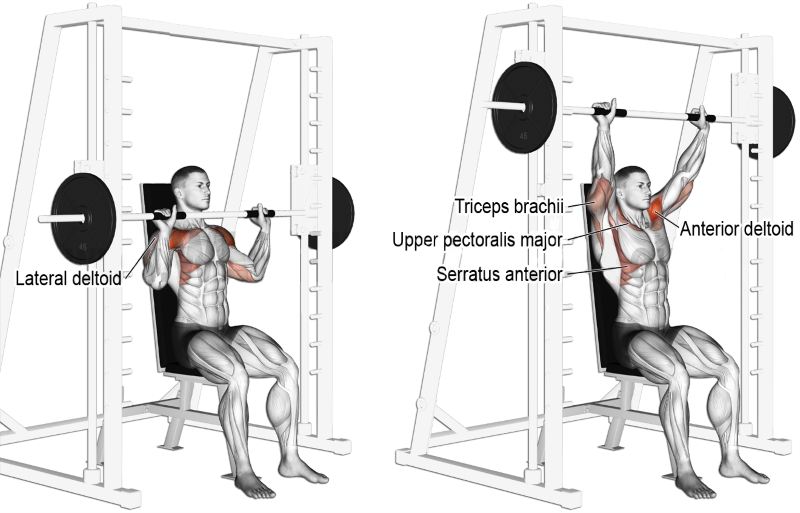 Do this exercise by sitting on an upright bench or a seat with a back to it, in the middle of the Smith machine in a position where if you lower the bar, it will almost touch your head. Sit and take the bar with a grip wider than your shoulders with your palms facing forward. Unhook the latches and lower it down just below your chin. Press the bar up and over your head, but don’t lock out your elbows when you get to the top of the movement. Lower the bar and repeat. Place this exercise early in your training regimen instead of dumbbells, machines or a barbell overhead press.

The Arnold press is named after Schwarzenegger himself. Have your wrists out so that when you get to the top of the movement, you will only be adding a frontal deltoid effect to a seated overhead press. This exercise will also affect your upper chest region. You can do it while sitting or standing, but if you sit your back will be protected and you’ll be able to lift more. 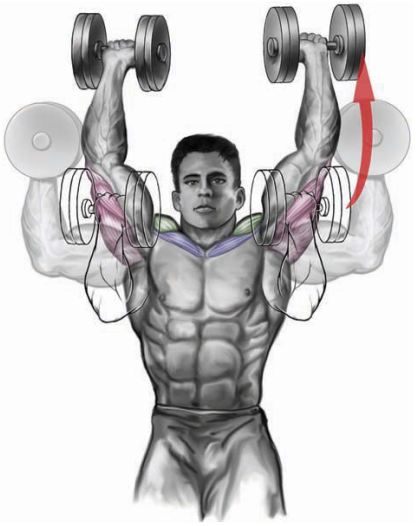 To perform this exercise, sit on a seat or a bench with a pair of dumbbells. Hold them in front of your shoulders with a supinated grip, which means your palms should be facing you. Press the weights upwards and turn your wrists outwards, so at the height of the movement, your palms face away from you and towards your front. Lower your dumbbells while rotating your wrists back into a supinated grip. Do this exercise early in the workout instead of lower back or barbell exercises or even normal overhead dumbbell presses. You can also do it after any of these, your choice.

The point to this exercise is for it to be unilateral, which will let you balance both your strength and your progress in both of your sides. It’s really tricky to make both sides equal, so this exercise helps. If both sides are lifting at the same time even with dumbbells and kettlebells, the stronger side makes up what the weaker side lacks. When you press with one side only, you can see the strength imbalance and you can work on fixing it by doing unilateral exercises. 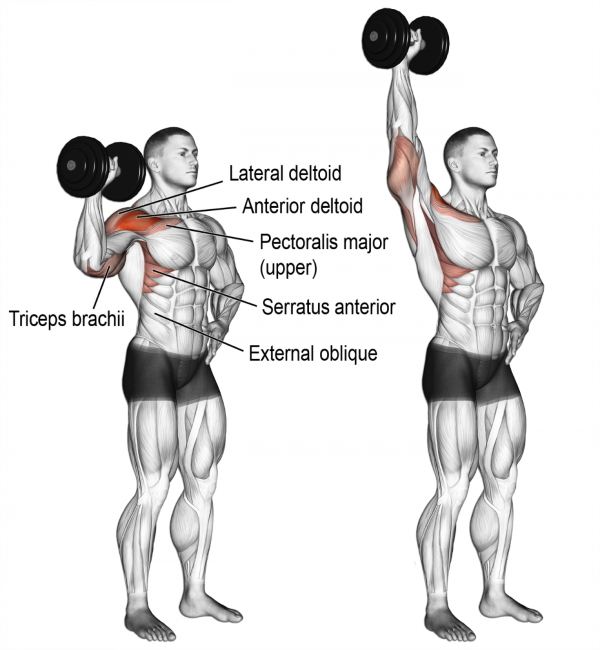 To perform this exercise, take a kettlebell or a dumbbell in one hand right in front of your shoulder. Have your elbow bent and the weight should be lying on the outside part of your forearm. Stabilize your core and slightly bend your knees. Press up with all your might straight upwards and turn your wrist forward. This means that the kettlebell should be behind your forearm when you get to the top of the movement. Bring your weight back down slowly and perform all the following reps with that arm. Switch arms and go again. Do this exercise early in the routine, instead of a barbell overhead press, an Arnold press or a two-arm dumbbell overhead press.