In the world of bodybuilding, deltoids are considered the gems of one’s physique. Well-developed deltoid muscles can greatly improve your build. They make your upper body look strong and powerful, and make your waist appear narrower than it is. But when it comes to deltoid training all people think about is the classic overhead presses. No doubt it is a great exercise for your shoulder strength but if you’re chasing boulder shoulders, it simply isn’t enough. Also, 3D deltoids are the hardest thing to achieve naturally. We’ve done some digging in the Bio-mechanic mines to find out the best exercises for your delt-development

First, Let Me Give You A Basic Insight Of Your Deltoid’s Anatomy

Your deltoid is made up of 3 muscles, that is, anterior, medial and posterior deltoid. Now, if you’ve sound visual-understanding abilities you can clearly see that the the majority of muscle fiberes are present in the medial region of your deltoids followed by the posterior region. Therefore, majority of the mass in your deltoids is gonna come from the medial and posterior region. This what makes the over head presses an overated and insufficient exercise because it primarliy targets the anterior region of deltoids which contributes very little to the 3D appearance. Also, the anterior deltoid muscles get sufficient or more than sufficient stimulation from pressing and fly movements for your chest
Now, Try These 3 Moves And Thank Us Later
Side Lateral Raises With Cabels Bending Forward

Lateral raise is a great muscle builder for your medial dletoids. However, being an isolation movement the load on your muscle fiberes is invariable throughout the range of motion and also becomes zero at some points
Performing this exercise with cables puts constant tension over the  medial head providing maximum stimulation for maximum gains.Bend your torso little forward while alling the movement of your arm with medial deltoid fiberes makes this exercise even more effective
Suggested sets and reps: 3 sets with 15-20 reps

Every coin has 2 sides. Though cables put constant tension over your muscles, you can’t increase the load a lot. And remember progressive over-load is another important factor for hypertrohy. This version of lateral raises allows you to get strong in the movement as well as target the medial deltoid muscle fiberes effecitvely as it changes the force vector. Utilizing different angles and rep ranges when training a muscle group can be a winning stratergy
Suggested sets and reps: 4 sets with 12
Reverse Machine Flies With Half Reps For Posterior Deltoids 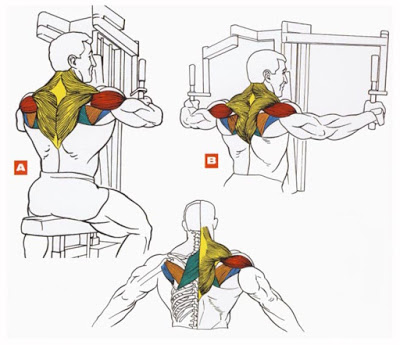 Now that we’ve killed the medial delts. It is time to shed some love over the posterior region of your deltoids. Reverse machine flies is the ultimate-isolatation mass builder for your rear deltoids. However, most people do it wrong. They go through a full range of motion, pinching their shoulder blades bringing the middle back, rhomboids and trapezius muscles into the equation. In order to purely isolate the posterior delt muscle fiberes perform the reverse-fly movement with half reps, that is, only till the point your arms reach your side, ensure to perform the reps slowly to get the mind and muscles connection