The Anatomy of the Bicep
Before starting any workout plan you should take time to understand the muscles that you’ll be using and the role they play in your everyday life. When you understand their function, you’ll be able to learn how to best use and manipulate those muscles during these top 5 exercises to achieve an optimal workout of your biceps. The biceps consist of three primary muscles; the Biceps Brachii, Coracobrachialis and Brachialis

This segment of muscle tissue is linked to the forearm bone (the radius) and originates in the process of the scapula (shoulder blade). This muscle tissue runs the length of the anterior side of the humerus (upper longbone of the arm) and makes up about 1/3 of the muscle mass of the upper arm.
Coracobrachialis –

This muscle, the smallest of the trifecta, attaches also to the coracoid process of the scapula with the other end attached to the humerus. The action of this muscle draws the arm forward and toward the torso.

This muscle crossed the elbow joint, originating in the lower segment of the humerus and extending to the ulna. While part of the bicep muscle group, the brachialis is the strongest flexor of the elbow however because it only inserts on the ulna (not the radius) it cannot participate in pronation and supination of the forearm (rotation).

The Top 5 Exercises for Increasing Biceps – The Breakdown
First and foremost, there’s a lot of equipment out there and the equipment you use is going to change the form and position of your workout.

Some machines are available to reduce strain on the rest of your body or promote a motionless workout while ramping up resistance. Whatever you use, that resistance is what’s important because the weight or resistance is what pushes the limits of the muscles and forces them to recover and grow. For this article, we’re focusing primarily on free weights because they require more form and concentration – giving a more powerful workout to the biceps.

Top Bicep Exercise #1 – The Standing Barbell Curl If you have any interest in building your biceps up in order to look like a tank, the standard barbell bicep curl is the best all-inclusive bicep exercise.

Regardless of the amount of weight, your body will use all of the bicep muscles and some forearm muscles to raise the weight as you flex the arm closed. The standard curl forces the arm to work in relative isolation from the back and shoulders, but on one condition – you can’t cheat. Torso swinging is common, and needs to be avoided if you want the most effective workout. The goal is to remain stationary, flexing the arm at the elbow joint without moving your upper body. Perform this bicep curl by holding a barbell in both hands. Hold the weight with your palm outward and let the weight hang at your hip so that your arm is fully extended downward. Tuck your elbow into your sides and curl the weight to your chin without moving your elbow, hips or torso. Maintain tension, let the weight down slow. Do not bounce the weight off your hips or quads to start the next rep.

Top Bicep Exercise #2 – The Alternating Dumbbell Curl The alternating dumbbell curl is a simple exercise that functions as a cross between a hammer curl and a standard curl.

Instead of curling one weight using both biceps, or simultaneously curling with two separate weights, the alternating curl lets you focus the intensity of the workout in each bicep separately. Torso swinging is also common in this workout, so it’s important to once again keep your elbows tucked into the body.

Related article:  THE 5 DEADLY SINS IN A DIET!

Start at the same point as a standard curl with your arm fully extended however your palms will be facing in toward your body. As the weight clears your flank you can begin to rotate your arm. At the end of the movement your palm will be facing toward your head.

Top Bicep Exercise #3 – The Hammer Curl While a significant amount of focus is given to the bicep, some of the muscle groups within the forearm will be working as well. Because the focus here is on a rotated curl there is a lot of emphasis on the brachialis and brachioradialis of the forearm.

The starting position for this curl is identical to the alternating curl, where the palms face in toward the body. Your elbows remain tucked in with your body and upper arms remaining stationary. Lift the weight, curling it upward without rotating the weight or forearm to the point where the weight is almost touching the shoulder of your lifting arm. Think of the motion of swinging a hammer – this is also where the bicep exercise got its name.

Top Bicep Exercise #4 – Supinated Bent Rows Resistance breeds muscle gain, and more weight equals more resistance. You can sack more weight into a bicep workout using rowing. Bent over straight bar rows can let you work double the weight over your standard curling or straight bar curls.
Grab the straight bar with palms facing up/away with hands shoulder width apart. Either pull the weight from the rack or deadlift the weight from the floor to a standing position. Once the weight is up, bend into position so that your upper body is almost parallel to the floor. Avoid rounding off or trying to lift with your lower back. While bent, raise the bar to touch your abdomen while keeping your elbows tucked into your flanks. Lower the bar just short of fully extended and repeat.

Top Bicep Exercise #5 – Chin Ups Not just any chin up either – this is about close grip chin ups. While curling or rowing can give you a significant workout, when was the last time you tried to curl your body weight with success?

If you’re over 150lbs and you don’t often try to beat yourself into submission then likely not often. Closing the grip on your chin ups will focus the pull on your biceps. You can use any secured straight bar or chin up bar. Reach up and grasp the bar so that your palms are facing you and about 6” apart.

Pull yourself upward, keeping your legs raised/crossed so that you do not touch the floor when you lower yourself. It’s important to get your chin up over the bar so that your arms are fully flexed. Maintain the tension as you lower yourself, and avoid relaxing once you get to the bottom of the rep. While all of these exercises will help you target the biceps, they’re intended to be inclusive with an overall workout program. You should never try to build only your biceps. You need to think in terms of your biceps being just a small part of the major muscle groups that form your body. In order for each of the muscles to work properly, the surrounding muscles need to be targeted as well.

Biceps like most muscle groups if worked out in this fashion should be trained once a week twice at the most if you have really weak biceps. Go hit the weights hard, these workouts will help you get the biceps you are looking for. Good luck 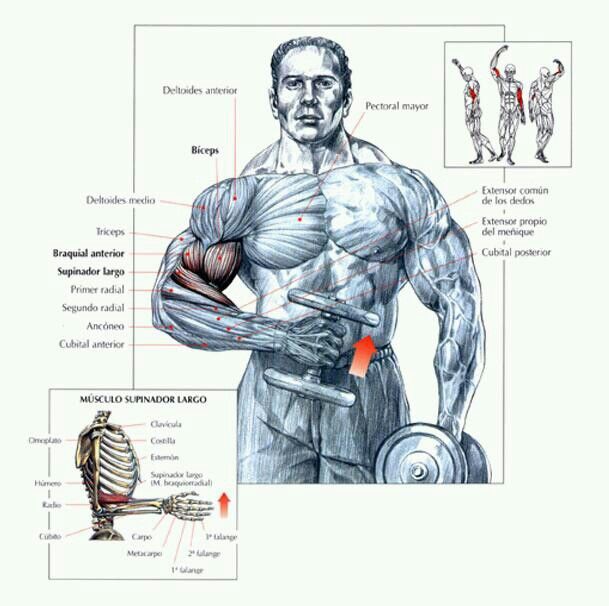