When you want to beef up your legs, free-weight exercises are of course, number one, but you can achieve more with a combination of them and some machine exercises which will stimulate your leg muscles in whole new ways. Of course, this isn’t mandatory as we all know it is perfectly viable to just do free-weight exercises, but it’s much easier to do a combination of them and you will reach your goals much faster.

When you’ve worked so hard that you can barely stand up without falling flat on the floor, you want to incorporate some exercises that won’t require any kind of balance or form, but will place even more pressure on your legs and it will make your muscles regenerate more than ever before. Let’s look at the list.

There’s nothing like a squat machine to mimic the exact movement that you perform when you do a normal squat. Your thighs and your glutes will be affected by this exercise similarly to the way they would be affected by a free-weight squat, so make sure that you have this one in your exercise plan. 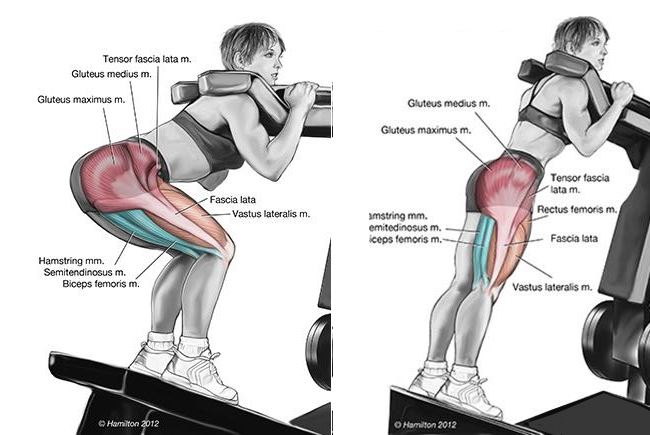 Also, the squat machine can help you correct flaws in your form, such as the common misconception that you should round your back with the barbell. It will help you learn how to do squats but it will also provide an awesome way to end a difficult leg day. If you don’t trust me, try doing squats without the machine – you’ll be running back to it soon enough.

Related article:  5 Simple Exercises That Will Transform Your Body in Just 4 Weeks

Any normal squat machine will have an advantage over the Smith machines because of their limitations – the Smith machine has dimensionally limited movement options, meaning you can only move up and down, but squat machines can move horizontally as well. Also, they have very useful shoulder padding which will help you spread the weight over a larger contact area, making the weight appear a little bit lighter than it would, were you to lift it with a Smith machine.

The squat machines have a larger footplate as well, which means that you can use any of a number of foot positions which in turn, allows you to perform movements that will activate different muscle groups such as the hamstrings, quads and glutes. Also, squat machines are amazing for exercises devised for intensity improvement, such as paused reps (at the bottom of the movement), isometric machine pause squats, rest-pauses and one-and-a-halfs for getting double the peak contractions. All in all, it’s a great machine, use it whenever you need to work on your legs but you can barely stand.

Hack squat machines are simple – it’s a squat, but at an angle. It’s not vertical or horizontal, just in between. This means that it will support your body and protect the lower half of your back. Hack squat machines, when analyzed by EMG analysts have been revealed that they work on the vastus lateralis as well as the vastus intermedius.

However, another noteworthy influence of the hack machine is its effect on the thigh adductor brevis and the magnus muscle as well. Since it’s at an angle, it allows you to utilize a bigger range of motion with your knees. Similarly to the previous machine, hack squat machines have a bigger footplate and that means that they allow for more and more diverse foot positions. You can pick positions that will accent the stress on your inner or outer thighs, your quads, hamstrings or glutes.

However, make sure that your hack squat is deep enough to achieve the maximum effect. If you want to add exercises with this machine to your schedule, add three sets of six reps each of half hack squats, at 1.25 times of your one-rep max, over just the top portion of the ROM sets.

Leg press machines will work wonders on your quads. If you make a 90 degree angle between your legs and your torso, the ROM around your hips will be lowered, which will decrease the activation of your hamstrings and glutes and transfer it to your quads instead. If you’re using a lower foot placement, this exercise will be even more effective. 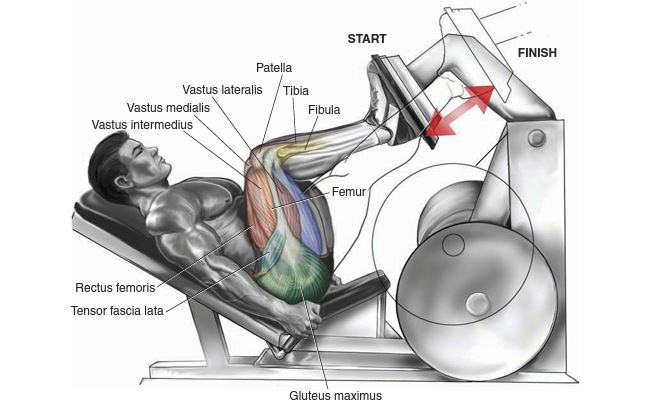 Since this machine also has a much bigger footplate, you can again, adjust your feet to reach the muscles that you want to activate. What I like to do is 4 dropsets of leg presses, starting with my 10-rep max. I do the ten reps, then take off about a fifth of the weight, or maybe even a tenth if I’m feeling extra strong. Then I do 10 more and I keep repeating that until there is only a single plate on each side of the machine. However, take note that you need to follow the proper form in order to achieve the best results.

Sounds funny? It’s going to be hilarious when you’ve got solid glutes and everyone else is still categorizing this machine as “girly” and “feminine”. Don’t be one of those people that make fun of something that could help their body.

Related article:  WHO KNEW CUCUMBERS COULD DO ALL THIS!!!

The butt blaster has a very wide range of movement around the hips, unlike the leg press machine, and it also keeps your knees stable when you exercise. This means that you can focus on your muscles (upper hamstrings, glutes) instead of worrying about joints not included in the current exercise. Be careful though – it’s easy to get carried away and overload your glutes when you get on the butt blaster.

In fact, it’s so easy that you will often be doing butt blaster exercises until you reach muscle failure. Dropsets will help you a lot with your goals as well, since they’re post-failure techniques and also super simple to do. I would suggest that you switch your legs every once in a while, without stopping, to make sure that the intensity is at its maximum levels. With these levels of stress and the simplicity of the butt blaster, you’ll be well on your way to fulfilling your dreams of having amazing legs.