Deadlift vs Squat: Which Exercise is Better?

Posted by admin, on 16. January 2018
2
If you are into lifting, you will agree that squats and deadlifts are the granddaddies of compound movements. The significance of compound movements in boosting strength, functionality and testosterone production has been universally accepted. Nevertheless, it is also the best way to target several muscle groups with a single exercise. Even though squats and deadlifts both fire almost similar muscle groups, they do have their respective places in your workout routines.  Apparently, there is no such comparison between the 2 lifts. However,  if we need to pick just one, it has got to be the deadlift. What gives deadlift an upper hand over squats? Here’s the logical answer
The Battle:  Deadlift Vs Squats
Joint Movements and Muscles Targeted
Joint Action: Squats: Knee Extension and Hip Extension
Deadlifts: Knee Extension and Hip Extension
Muscles Targeted:  Squats- Quadriceps, Hamstrings, Glutes, Erector Spinae and Calves
Deadlifts:  Quadriceps, Hamstrings, Glutes, Erector Spinae, Calves, Trapezius, Forearms and Latissimus Dorsi
Type of Movement
Squats:  Squatting, as a category, falls under a pushing movement because you apply force to stand up after squatting down. You are basically pushing weight against gravity

Deadlifts: A deadlift is a combination of both push and pull movements.  The back muscles, including your traps and latissimus dorsi act as pullers whereas your lower body muscles, such asquadriceps, glutes and hamstrings support the pushing movement of the exercise.  The erector spinae group acts as a stabilizer that helps in keeping the core tight and upright 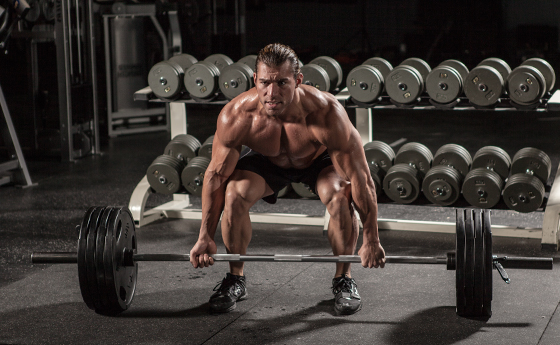 The Perspective
As mentioned above, both exercises have almost similar movements (knee extension and hip extension). The only varying factor that actually adds that little difference is the weight/load position. In a squat, the weight is over your traps (upper back) and you perform the exercise with a slightly upright posture as compared to the deadlift.  Whereas in the deadlift, the weight is in your hands (the movement remains the same) and while pulling the weight off the floor, the spine flexes more as compared to the squat, especially in traditional deadlifts. The pulling movement of deadlift activates the back muscles. Also while gripping the bar your forearm muscles also takes the charge isometrically
This Is The Best Leg Developer Amongst These Two
Despite the fact that deadlifts are a better compound lift from the efficiency point of view, squats are the best leg developers. Reason being the fact that  the resistance is dispersed among the upper and the lower body muscle groups during the deadlifts whereas, in squats, most of the resistance is spread over your lower body muscles ( the upper body muscle only work as stabilizers)
The Bottomline
Well, both the squats and deadlifts are considered to be the king of compound lifts. However, while deadlifts are slightly more efficient and primarily considered as a back developer, squats win the contest as the best leg developer. As the best pick among these two, the deadlift clearly wins due to above-mentioned reasons

Related article:  Muscle Gain - Most People Aren't Working Out Correctly, Are You?